Home > The Simon Fisher Collection of Maritime Artwork « Back 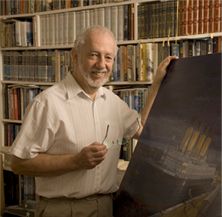 Simon Fisher is internationally renowned for his original paintings & drawings that illustrate the great ocean liners and warships of the twentieth century. Unique among his paintings are eight images of which have been produced as limited edition prints and signed by survivors of the disaster.

He started his career in advertising studios in Bristol and Bath, whilst at the same time attending drawing, art & design classes at the West of England Academy of Art, in Bristol. He has been a professional artist for over 30 years.

Simon produced his first limited edition print in 1988 from a painting of Titanic. This print proved a runaway success and paved the way for a series of prints featuring the ocean liners of the great transatlantic era.

Due to popular demand and the advent of the blockbusting film by James Cameron, Simon became the foremost artist/publisher featuring prints of the Titanic. A major exhibition of Titanic artefacts in the USA featured his work to illustrate the story of the ship.

Sales of his limited edition prints runs into the tens of thousands and are displayed in private collections, galleries and many of the big liners across the globe.

A long standing member of several societies, Simon has an extensive collection of archive material which he uses for the exacting research that goes into producing his original paintings. Some of which take up to six weeks to research and paint.

All the prints in the Ocean Liner range are printed on 250 gram art paper using light fast inks. Only the designated number of prints are produced, after which the printing plates are destroyed. Where applicable, each print is signed individually by the signee in pencil and then signed and numbered by the artist.

A certificate of authenticity accompanies each print giving details of the signee.

White Star Lines are proud to have been able to acquire a quantity of most of Simon Fisher's prints through the secondary market, all of which are in as-new, condition.